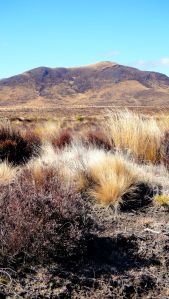 An early misty Saturday morning saw Aonghas and I on the road south to Waiouru.  A scouting outing to the Waiouru Army Museum which, I have to confess, I only agreed to go on because of the skiing opportunity the following day!  A brief stop in Taupo for the loo and a coffee before the last hour and a half to Waiouru.  The views down the Desert Road were stunning and we had to stop a couple of times to take photos although the sun was so bright that it was difficult to see what we were taking photos of!  We met up with the rest of the scouts at the museum and went in to meet our host; he certainly set the mood for the day!  A dry, deadpan sense of humour that had the scouts wondering whether he was serious or not about the threats he made for any infringements of his rules!  Then we split into groups for our tour round the museum.  First stop was the Wall of Tears – this is a greenstone wall with water flowing over it and a visual and auditory roll of honour for those Kiwis who have given their lives over the years for their country.  It is the place where all new recruits are brought to pledge their allegiance and where Anzac ceremonies take place; a very moving but tranquil place to be.   After that we were taken around the exhibits which are meticulously presented, thoughtfully and artistically arranged and the attention to detail is amazing.  Our guide was one of the researchers and 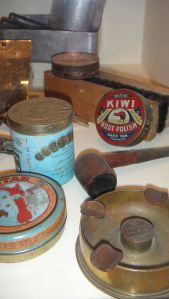 designers and he was clearly passionate about his subject and he kept the scouts enthralled.  The mix of social mementos and military vehicles and paraphernalia was fascinating.  Our tummies were definitely

rumbling by 2pm and we were itching for our kai.  We should have had something to eat in Taupo but I had thought we were going to eat when we arrived at the museum and not after the tour.  Never mind, a little bit of hardship is character building!  the scouts and the parents were divided into groups of 5 and each group was given a RatPac .  A RatPac is a pack of food that will provide one soldier with all the food and drink he needs for 24 hours.  The scouts were asked to nominate a leader who was the only one who was allowed to communicate with our host.  He advised us to open the RatPac and start eating as soon as we could, “you never know when the bullets will start flying” – opportunist eating!  However, remember that there are 5 people in your team and you all need to survive if you are to be a successful fighting unit!  In the pack there were three main meals as well as muesli, tea, coffee, hot 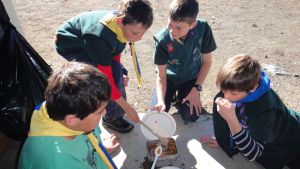 chocolate, salt, pepper, chilli powder, onion flakes….. we had to get a cooking stove and firelighters and try to cook as much as we could as quickly as we could – add whatever you want to each main meal, you can eat in any order, but … remember to check that everyone in the group is happy to have chilli powder and onion flakes in their noodles because you are a team and you need everyone to be fit so everyone needs to eat.  Aonghas’ group seemed to forget that as they added chocolate powder and chilli to the pasta as well as sugar and pepper!  Our group ate well but Gus was still a little hungry!  Cleaning up was next and then down to the exciting part of the day; a ride in an amphibious vehicle around the swampy grassland. We all watched as the first 11 scouts donned oversized army shirts and helmets before climbing into the back of the 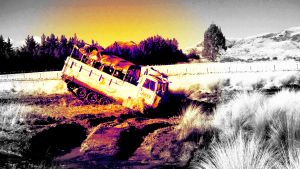 truck; we listened to the shrieks as they went

up and down over the bumpy terrain, in and out of the swampy bits and through the mud.  Gus went next and he looked a little nervous as he climbed in but came off at the end of the 5 minutes buzzing!  Martin and I jumped in the front of the next ride to get a front seat view.  It was very noisy but great fun, up and down what seemed to be impossible angles until ….. we came to a grinding halt stranded on the top of a big bank of mud!  Our driver tried every gear, reverse, forwards, full throttle, slow and steady – nothing worked so we had to abandon ship and pick our way across the bog!!  Very funny!